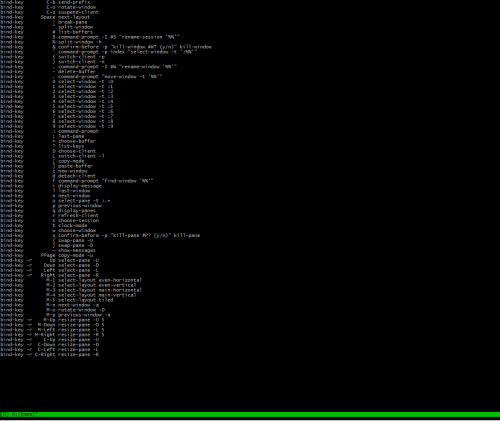 Tmux is a terminal multiplexer, that is a piece of software that allows you access to multiple terminal sessions from a single terminal window. It is extremely useful when doing maintenance on some server via SSH because it will allow you to simultaneously see the output of multiple terminal commands at the same time without having to run multiple ssh sessions.

At the time of writing this article tmux is available in the RHEL EPEL repository. I won’t go into details explaining how to add the EPEL repository and install additional software from it, but this article from the Rackspace knowledge center gives a pretty detailed and straightforward explanation on how to do it:

After you have completed the steps outlined there you just have to run:

The process for Ubuntu is much more simple given that you are running a recent enough version. The <strong>tmux </strong>package is included in the base repository so its just a matter of:

This is essentially a new terminal with the default shell logged in as your current user account. It looks somewhat different from a traditional terminal session in the sense that it shows a green (by default, but can be changed) status bar with additional information such as the number of active sessions and which is the current session you are working on. The current page that you see on your screen is referred to as a “window” in the tmux context. You can have multiple windows, which operate similarly to having multiple browser tabs open and furthermore you can split each window into multiple panes and execute commands in each pane.

If you choose to rename the current window, you will see the changes reflected in the status bar of tmux in the list of all current windows. That is convenient to keep track of long-running tasks you are monitoring. When using the “o” shortcut to move between panes keep in mind the order (panes are numbered left-to-right, top-down). For faster navigation you can also use the keyboard arrows to switch between panes, so if you press CTRL-B and then one of the keyboard arrows the pane in the direction of the arrow will be activated. You can close the current panel, by typing exit in it, which will cause the other panes in the window to adapt and fill the entire space. If you dont have any other panes in the window, typing exit will close that window and if it’s the last window, it will close tmux and return to the session that launched it.

What happens under the hood is actually a bit more complicated. Tmux runs in a client-server mode, where each time you launch tmux a new sessions is created and the client is attached to that session. This gives you quite a bit of flexibility since you can “detach” the client from a certain session and let it run in background and then later re-attach to it and continue where you left off, having all the windows and panes saved in the same state. In order to detach from the current session hit the control key + d:CTRL-B + D

After you have detached from a session you are returned back in the session that launched tmux. You can type:

and this will give you a list of currently active sessions like the one below. Note that the left most number is the session ID, which you can use to attach back to that session. This output also gives some information about the running sessions, such as number of windows, date created, size, etc.

In order to attach back to a running session, look at the id of that session in the output above and type (change the 0 to the id of the desired session):

and this will bring you back to the same state that you left of, with the exact same window and panes arrangement.

A really powerfull feature of tmux is that you can write scripts for it. I won’t go into details about that and the man page provides pretty good description of the commands and options you can use.